Creating mobile news to connect with truck drivers, and beyond 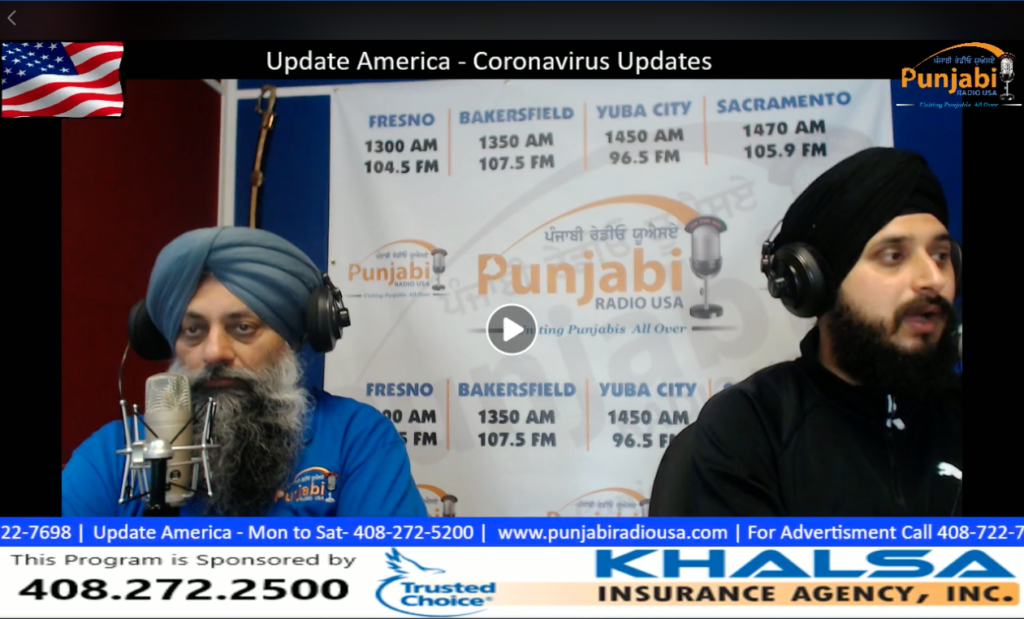 It was a protest like no other. A colorful caravan of enormous rigs with American flags waving and horns blaring drove along a desolate stretch of California’s Highway 99 in October 2017. On the side of the dusty road, two men with dress shirts, blue turbans and full beards recorded the event live on a cell phone, and offered commentary.

Punjabi Radio USA hosts Harjot Singh Khalsa and Rajkaranbir (Raj) Singh spoke directly to some 200,000 of their Facebook followers, many of them Punjabi-American truckers like those in the caravan protesting federally-mandated electronic logbooks. By the time they hopped back in their car to rejoin the convoy, tens of thousands had viewed the Facebook Live feed and hundreds commented in a mixture of Punjabi and English. “Today is victory day for truckers,” one wrote. “Good job Punjabi Radio thank you,” added another. 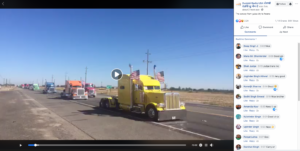 Punjabi Radio’s listeners, who come from a northwestern part of the Indian subcontinent that was split during the partition of India and Pakistan, have come to expect relevant, up-to-the minute news coverage from the San Jose-based outlet.

In the weeks after coronavirus hit the U.S., Punjabi Radio’s three full-time staffers, with a team of contributors, cranked up COVID-19 coverage and introduced additional Facebook Live updates that are distributed via WhatsApp and YouTube, as well as broadcast on AM/FM stations.

The site also became a place for communal support: Truckers reported that they couldn’t find open restrooms, or that they hadn’t been properly cleaned. Listeners across the U.S. called in and offered their own facilities. Religious leaders from gurdwaras came on the show to invite truckers to their houses of worship for a rest stop and a fresh, take-out meal.

“It’s been crazy,” said Raj Singh, manager of Punjabi Radio, in March. He and his colleagues have been constantly tracking the news, and the phone has been ringing almost as consistently with confused people, or those wanting to help. “Even during the time that everything is locked down, they are trying to help each other.”

Of the estimated 280,000 Punjabi speakers in the United States, many are Sikhs who immigrated following massacres in India in 1984 and found work in the trucking industry. Punjabi Radio’s varied platforms serve those truckers well, and Singh estimates they consist of roughly a third of the total audience. 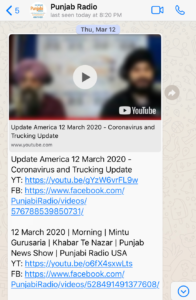 Updates from Punjabi Radio via WhatsApp

“That’s our secret,” said Singh. “Our audience can listen to us wherever they are.”

When Harjot Singh Khalsa and his wife Balwinder Kaur created Punjabi Radio in 2010, the media serving the Punjabi diaspora were small newspapers heavy on advertising. The couple invested in a small, sideband frequency in 2010 that could only be accessed using specialized radio sets with a chip in them, and they bought up these radios, first developed in the 1950s, and gave them out every Sunday at Sikh gurdwaras. Singh, who was working on a master’s in engineering at San Jose State University, signed on as a volunteer.

Eventually, they handed out 50,000 sets throughout California, and received some donations in exchange. “Pretty much every Punjabi household has that chip in their home,” said Raman Dhillon, the CEO of North American Punjabi Trucking Association and who runs a special trucking show for the station. He says he still owns two of them.

They soon developed online streaming and a new app to offer cell phone access. But using the app necessitated having WiFi access and chewed up data. So Punjabi Radio offered something still better: a dial-in option that allowed listeners to use their cell phones as radios. Truckers traveling across great distances could call in and listen all day long, and audience numbers got a big boost.

In 2015 an AM station became available in Yuba City, home to one of the largest concentrations of Sikhs in the country, and Punjabi Radio took a risk and bought it. “We tried to attend as many community programs as possible,” Singh said. “Listeners would talk to us and give us feedback. Enthusiasm was there and that’s how we started growing.” Eventually they expanded to a four-station operation with AM/FM coverage across much of the Central Valley and Northern California, while cities without terrestrial radio received sideband coverage. 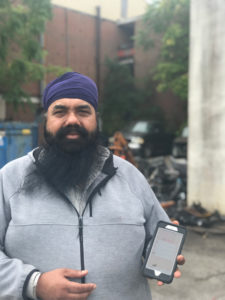 Baltimore-based trucker Jawinder Singh (no relation to Raj – Singh is a last name for men of the Sikh faith) used to spend his days listening to the CB radio or playing CDs from India. He looked at Punjabi newspapers but they were a week late. These days, Punjabi Radio keeps him company as he crisscrosses the country. When Singh has good internet service, he will stream via his data plan. When that is down, he will dial in. Singh can learn about news almost instantaneously, from the U.S. to India.

On March 24, the day that India announced a quarantine for all residents for three weeks, Singh was driving a haul of milk from Virginia to Texas, and set to return to Baltimore with a trailer filled with onions. It was a precarious journey, one of the hardest parts locating clean restrooms. “I’m risking my life for people to get food,” he said. “But there is no toilet paper.” When he complained, he says the attendant treated him “like an idiot.”

Then he tuned in that morning to hear the latest from Punjabi Radio, and appreciated their reports raising the issue.

Before the crisis took precedence, on his trucking show Dhillon would talk about new emissions rules in California, EPA waivers for truckers, and a new independent contractor bill that the governor just signed. Overall programming objectives, say the station’s founders, have been to educate listeners about America, and help them to be better participants in civic life – though there are also shows featuring Punjabi songs, as well as talk shows, that are popular with listeners.

In addition to Punjabi Radio’s three full-time staff, the media outlet employs about 20 part-timers, including correspondents in Punjab. Recognizing the buying power of the growing Sikh community, a few national brands such as Toyota and Western Union, as well as some government entities, have placed ads with Punjabi Radio. The outlet also collects a small amount of donations made via the radio’s website. But the station is mostly supported by radio spots from local Punjabi businesses. During the start of the pandemic they lost about 20-30% of advertisers, but by June ads were picking up again. Punjabi Radio also received a $10,000 government grant and $150,000 small business administration loan. Meanwhile, rather than cutting back hours, they added new programs and ran shows on how listeners could receive loans, stimulus checks, and additional local assistance for immigrants.

Before the pandemic, Singh explained that Punjabi Radio’s success rested on slow and steady growth, a lesson all the more relevant today. “Anybody who wants to come into this field, who wants to serve your community, has to have patience,” he said. “It takes years and years to build that trust. Everything is so fast, the news cycle is changing every day, still it takes a lot of time to build some trust in your community.”