Deeply reported digital news for, and about, immigrants in Minnesota 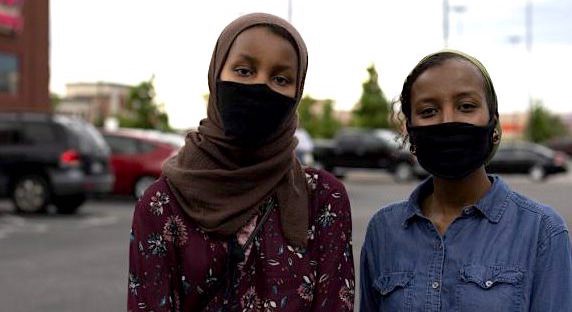 Young Somali Americans in Minneapolis have become activists in the wake of the police killing of George Floyd, Sahan Journal reports. (Photo by Jaida Grey Eagle for Sahan Journal)

The protests and looting that followed George Floyd’s murder were “literally in many Somalis’ backyard,” journalist Ibrahim Hirsi writes in one of Minnesota’s newest publications, Sahan Journal. He realized this proximity and the unchecked violence caught on video could be a tipping point in the community: Young Somali Americans, rebuking their parents’ tendency to distance themselves from African Americans, were taking to the streets. This was a story Hirsi felt uniquely equipped to write. He too had grown up as a Somali immigrant raised in Minnesota. He had struggled with what it meant for him to be Black in America. 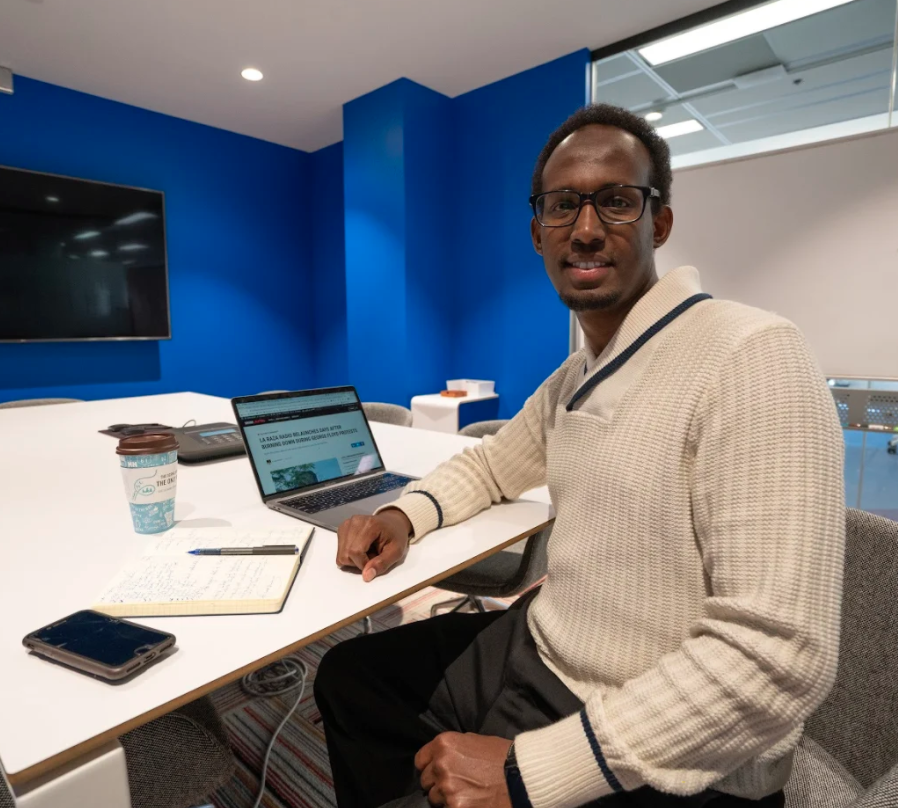 Sahan Journal was created for stories like this to be the primary focus of coverage. In 2019, founder Mukhtar Ibrahim, who was also born in Somalia, left a reporting job at the Minneapolis Star Tribune to launch the digital news outlet to serve the “newest” Minnesotans – the roughly 9% of the state’s residents who are immigrants. In less than a year, he has built up a non-profit newsroom in partnership with Minnesota Public Radio. The station pays his salary, co-publishes most of Sahan Journal’s stories on their website, and is testing out providing stories for him to translate into Somali, Hmong and Spanish. Ibrahim has also brought in more than half a million dollars in foundation funding from local and national donors such as the Saint Paul & Minnesota Foundation, Facebook and the Knight Foundation. And Sahan Journal is reaching more than 50,000 unique viewers a month and many more people are tracking its coverage via social media.

Ibrahim’s target audience is primarily young professionals like himself. They could turn to the Star Tribune, MinnPost, Minnesota Public Radio, or local television, but they’d likely find relatively sparse coverage of immigrant communities, and usually relegated to the diversity or crime beats. He believes his audience chooses Sahan for a much richer and varied selection of stories in which people like them are the subjects.

“The local media landscape is predominantly white and newsroom leaders are not investing resources in fully covering these communities,” Ibrahim said. “They are slow in making news coverage more inclusive, despite the increasing diversity and the rapid growth of Minnesota’s immigrant population.”

Shifting population dynamics are particularly profound in the Twin Cities, which are no longer as white as they once were. St. Paul, where Sahan Journal is based, is about half people of color, and 20% immigrant, according to census data. “The people who are running for office now are a lot of immigrants who are serving in major places that white people predominantly represented in the past,” said Hirsi, who is also a PhD student in U.S. history with a focus on immigration at the University of Minnesota. “I graduated from a high school that is 100% immigrants. But when you look at the local television, you’ll never see a single story about immigrant communities.”

When Mukhtar Ibrahim graduated from the University of Minnesota with a journalism degree in 2011, he had a hard time getting even an internship, which he thinks may have to do with his immigrant background. Two years later, he launched his own news outlet: an early version of Sahan Journal. But the project lapsed as he found jobs and fellowships in mainstream journalism, reporting for Minnesota Public Radio and studying at Columbia University, before joining the Star Tribune. Still he dreamed of reporting on his community and making it the main topic of coverage. So in 2019 he revived Sahan as a full-time project and with initial funding from MPR.

A 2014 banner for an early iteration of Sahan Journal with more of a focus on Africa.

Since launching in mid-August, Sahan has covered how second-generation immigrants beat out incumbent white candidates for political endorsements, reported on how Latino pork plant workers are being exposed to COVID-19, and provided deep dives into working conditions for East Africans in an Amazon plant. Some of the stories that have done best, like a recent feature on a Somali woman who sews masks for health care workers, fill a hunger for positive community coverage.

“When bad things happen, that’s when they focus on these communities,” Ibrahim said of the mainstream media. “We try and chronicle the struggles and transformations of these communities. We also want to highlight and document how they are changing and contributing to this society.”

Reporting is informed by deep ties to the community, activity on “Somali Twitter” and other immigrant social media networks, and tips from readers.

In addition to deepening and broadening coverage of immigrant communities, Sahan’s goal is to “create a pipeline of young journalists of color by training them and providing them a platform,” Ibrahim says. To that end, in addition to freelancers, he was able to hire Hirsi to work over the summer, and he is bringing on three reporters through Report for America. 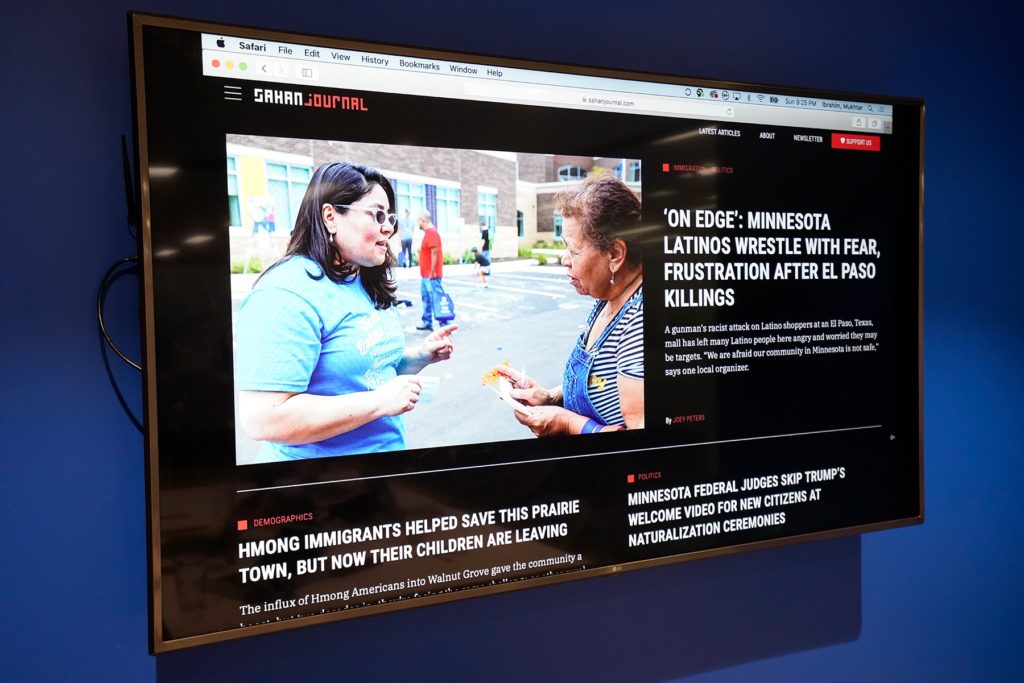 As the leader of one of a handful of immigrant-run non-profit newsrooms, Ibrahim has been very successful at cultivating foundation support in recent months, and is also trying to develop alternate funding streams. The Report for America funding for journalists only covers half of the costs, and Sahan Journal has been trying to match that funding via a membership drive. They are also working on developing advertising and underwriting, with Delta Dental of Minnesota sponsoring a health beat and running ads from the local Department of Health.

“They are just super smart, super aggressive in a good way about seeking support,” said Sue Cross, the executive director and CEO of Institute for Nonprofit News. And as other outlets are cutting back, Sahan Journal is expanding. In June, the site published a new advertisement: Sahan Journal is seeking a dynamic Managing Editor to lead its groundbreaking news reporting on Minnesota’s immigrant and refugee communities.