A one-woman mobile newsroom livestreaming at the border 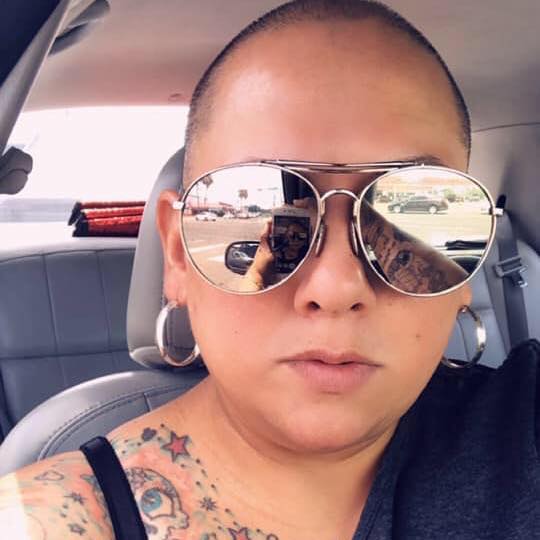 Her real name is Priscilla Villarreal, but she goes by La Gordiloca – the fat, crazy lady. She has been arrested for misuse of official information. She has been sued for defamation. She is incredibly well-sourced and says she has learned the hard way lessons about fact-checking and has gotten serious about verification – though she always adds her perspective to her reports.

Villarreal is a tattooed one-woman mobile newsroom who, until the coronavirus lockdown, often broadcast live while driving her car. She sometimes still broadcasts from it, but for much of this spring, it was parked.

“I say what other people won’t dare say in our city, and I post what is not being told in the news and what’s hidden behind closed doors,” she says, defining her path to success in three words: “raw, unedited, uncensored.” Love her or hate her (and there are Facebook groups of both fans and detractors), there is no denying that her approach has built a tremendous and engaged following of her local reporting and commentary. In five years of muckraking broadcast exclusively on social media, her Facebook following has swelled to more than 165,000 surpassing the local Laredo, Texas newspaper founded in 1881.

According to The New York Times, La Gordiloca “reflects how many people on the border now prefer to get their news — and just maybe, provides a glimpse at the future of journalism.” Villarreal has also been written about in the Los Angeles Times, Latino USA, and there is even a Hollywood reality show based on her in the works.

Most of the time she broadcasts in English, but increasingly she chooses Spanish as her followers push her to do so. She swears a lot in both languages. Her commenters, reflecting their bicultural city of 260,000 where 90% of adults speak Spanish at home, switch between the two. 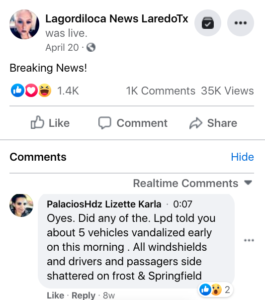 Before Villarreal even addresses her audience in her breaking news posts, tips often come in.

Since the coronavirus crisis started, Villarreal, who has asthma, has been strictly on lockdown in her Laredo apartment. On the evening of April 20, she wrote “Breaking News” and then addressed her audience via Facebook Live. Before she even started talking, comments streamed in the chat section. “Oyes, listen.” Had the police department told her about the five vehicles vandalized that morning? And in Spanish: Interview someone with this disease, because I’m starting to doubt its existence.

Then Villarreal, following her typical “¡Que rollo!” or “What’s up?” greeting reveals her breaking news: The state of Texas has opened an investigation because the local hospital lacks protective equipment for health care workers. More than 60 employees had the disease. This story had been covered already in local outlets, but Villarreal added extra details that had come to her from tips from hospital workers.

Villarreal blends news quickly with commentary: “Lots of people think we’re ready to open, they say we’ve got bills to pay,” she says, “but I think it’s too soon.” Like call and response in church, dozens write in that they agree with her. For another 10 minutes she goes on, cursing, riffing on problems with families shopping together in Walmart, demonstrating the correct way to wear a mask, bouncing between Spanish and English, and mixing her opinions with actual reporting. The more than 32,000 people who watch offer more than 1,000 comments.

Not everyone is a fan. “They don’t like the way I speak, my vulgarity,” said Villarreal. “I tell them this is one of the reasons I’ve gotten all my followers because I don’t sugarcoat anything, I tell it as it is.” But, she added, “when shit like this happens they’ll be like ‘here is this information for you.’”

Villarreal, a high school dropout who once worked removing scrap from tractor-trailer crash sites, got her start in journalism when she recorded a hostage situation in her neighborhood. “It wasn’t anything that I decided to start doing,” she said. “The girls were shot and the man holding them killed himself.” She posted the video on Facebook and more than 800,000 people viewed it. 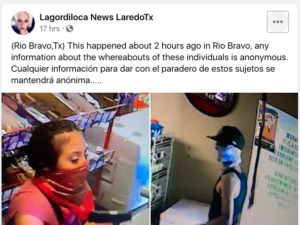 Thus began a new habit of recording news and posting unfiltered reports. Her currency was what she observed on the border: accidents, drug busts, suicides. Then Facebook Live was released and she found the immediacy of the medium amplified her impact. “I started getting thousands and thousands of followers every time I would go live and record something new,” she said. She called her reporting News on the Move.

After she was arrested in December 2017 for revealing information about an officer who committed suicide, she livestreamed as she turned herself in. The charges were ultimately dropped after a judge ruled the case unconstitutional, but the criticism continues over her often confrontational approach with city officials.

These days, she says, it’s the police in Laredo she’s most afraid of, even though she lives five blocks from the bridge to the Mexican sister city of Nuevo Laredo – for which, prior to coronavirus, the U.S. State Department had issued a “do not travel” warning due to “organized crime activity – including gun battles, murder, armed robbery, carjacking, kidnapping, forced disappearances, extortion, and sexual assault.”

Villarreal reports and produces La Gordiloca. In the past, she balanced it with other gigs running her snack shop Big Mama’s Eats and Treats and as a marketer for a home health company, but since the pandemic she has been out of work. She gets editing and digital production help from her mother and a friend. Until coronavirus hit she had six regular clients whose ads she produced and ran three times a week, such as a live visit to Las Palmas Party Pools. By June the ads remained on hold, as the businesses had to shut down or were only operating at 50%, Villarreal said.

Villarreal learned journalism by doing it, and with the help from a mentor at the local Univision station she’s developed practices for verification and caution. “I’ve tried not to put so many graphic details in my stories. I’ve seen when family members arrive to the scene,” she said. But she is not going to change how she communicates. “I’m from Laredo and you need to talk to people the way that I do.”