Merging FM and digital to reach the Portuguese diaspora 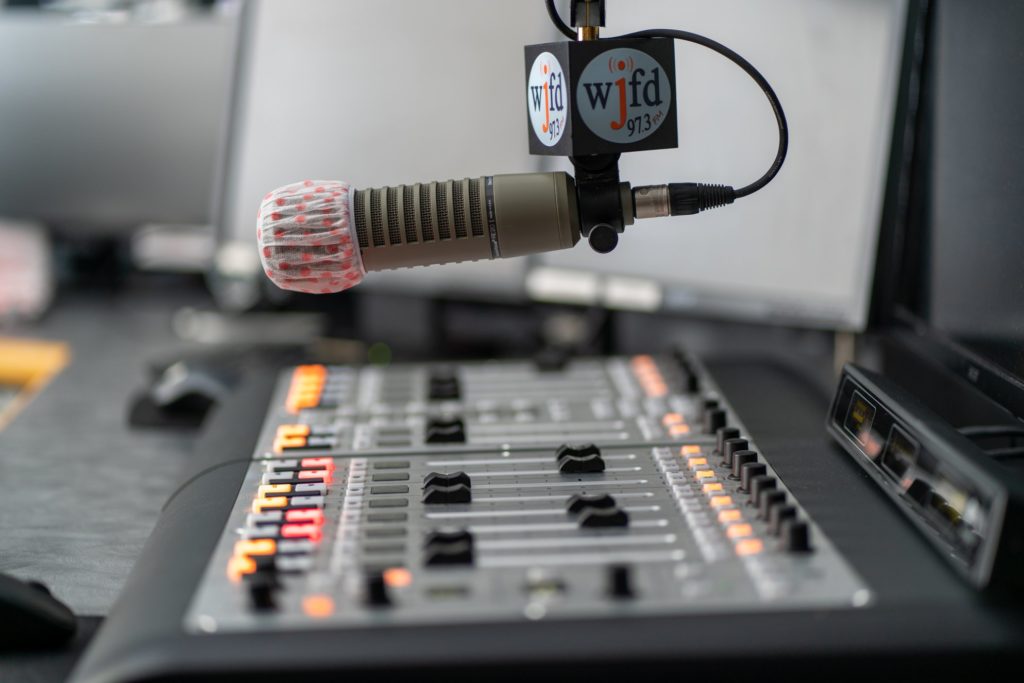 Lately, urgent calls and messages from Portuguese speakers across the United States stream into a small radio station in New Bedford, Massachusetts, with a singular focus.

“99.9% is about the money,” said Jorge Morais, a host and general manager who has been at the station since 1987. “Everyone asks for the stimulus money,” he said, noting many have reasons for not getting the relief. Sometimes people work under the table, while others didn’t file their taxes. 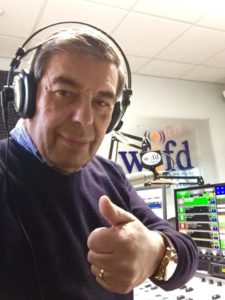 Jorge Morais has been with the station since 1987.

Since mid-March the 24/7 FM station, which primarily broadcasts music, has offered more and more live talk interviews to inform listeners. Azores-born Massachusetts State Representative Antonio F. D. “Tony” Cabral, a Democrat who’s served the district including New Bedford for nearly three decades, is on the program every weekday. Other guests include doctors explaining COVID-19 symptoms, community leaders talking about Social Security scams, and government representatives from the Azores discussing how the disease is spreading there. The stories are broadcast on the radio, Facebook, distributed via apps, on the website, and sometimes on video. In addition, a brief summary of local news is aired four times a day, mostly drawn from newspapers and press releases. 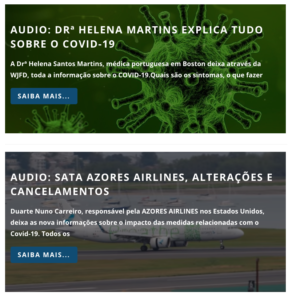 Reports from a doctor explaining COVID-19 and an update from SATA Azores Airlines on changes and cancellations.

For WJFD 97.3, embracing internet radio has been an opportunity to stay connected to an aging immigrant community, and forge new connections. Twelve years ago, even though the FM radio station had an estimated 400,000 listeners as the biggest Portuguese station in the country, the owners started a big investment in digital. “No more vinyl, no more cassettes, no more CDs,” Morais said. “Everything was digital.” They joined the iHeartRadio station network, got on Alexa and Google Home, and installed a live audio player for their website. All of these moves transformed WJFD 97.3 from a station with a narrow regional reach in Eastern New England to one that connects with the Portuguese community across the U.S. and beyond.

While the first Portuguese and Cape Verdean immigrants arrived in the mid-19th century to work in the whaling trade, the initial big wave came later for jobs in New England’s growing textile industry. Over several decades, Portuguese immigrants put down such strong roots that when a huge earthquake hit the Azorean islands in the 1950s, New Bedford became a place of refuge. Then, following the easing of restrictions in the Immigration and Nationality Act of 1965, Portuguese migration to the U.S. took off.

In the wake of that migration, WJFD 97.3 was established in 1975 as a source for Portuguese music and connection for the community. “They’re always there for us,” Helena DaSilva-Hughes, the executive director of the Immigrants’ Assistance Center in New Bedford told South Coast Today in 2015. “We’re very fortunate to have such a powerful Portuguese station locally.” She recalled in the interview how as a recently arrived immigrant more than three decades ago she’d listened to the station delivering news from Madeira, the island she’d left behind, and offering information to help her understand Massachusetts. 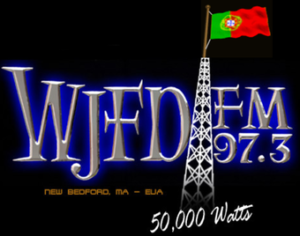 In recent years fewer new immigrants from Portugal are arriving, while some Portuguese Americans are moving to warmer climates in the U.S. or returning to Portugal. Others just come for the duration of a tourist visa. While the new immigrant Portuguese listenership is on the decline, the station is picking up listeners from across the country and Portugal. Morais estimates 20% of listenership now comes from outside of New England. WJFD 97.3 has also embraced other Portuguese-speaking communities from Cape Verde and Brazil and tried to connect them with the outlet, featuring their music as well.

The station is almost entirely dependent upon advertising, and beyond an occasional spot from a national brand like Dunkin’ Donuts or McDonalds, more than 80% is local Portuguese-owned businesses. The internet had already hurt many of these local businesses, and the coronavirus delivered a stronger blow. Advertising sales had crashed about 50% by May. “Restaurants, they closed. Auto sales, they closed. Other companies, they closed,” Morais said. “Construction companies don’t work 100%. Bakeries don’t work 100%.”

Despite cancellations, in particular travel which generally takes place over the summer, Morais is certain WJFD 97.3 will weather this storm. “I’m very confident we will get these people back again,” he said. “Maybe two or three months, by the end of the year, we’ll have 90% back again.”