John Heaston was a precocious young publisher of an Omaha alternative weekly when the Mexican-American founders of El Perico came to him in 2004 with a proposition. Would he be interested in buying their Spanish-language newspaper?

Heaston, who had started covering more immigration issues with the rise of the nativist movement in the early 2000s, saw it as an opportunity to report on a burgeoning community, a task that had been challenging to do with no Spanish speakers on staff. “It ended up being a smart business move,” Heaston said. “Now I could really cover all the community.”

In the 16 years since then, his alt-weekly The Reader and El Perico withstood the media meltdown, found innovative ways to monetize, and forged a symbiotic relationship. Since the coronavirus hit they have been challenged in new ways, as the small team had to step up its digital and social media presences and production schedules, after the slower pace of print. Meanwhile, although the affiliated Pioneer Media consulting practice which has supported both news outlets is “incredibly strong,” according to Heaston, print advertising took a big hit since March and three employees out of a total of nine for the company have been furloughed.

Karlha Velásquez, a Venezuelan immigrant who trained and worked as a journalist in Caracas, was relieved to not be one of them. She had just started in September as an office manager with The Reader/El Perico after a former editor left. In March, her job morphed into a reporting and production one. She is posting three to five videos a week, sending The Reader coverage to a translator in Mexico City, laying out the paper with a designer in Colombia, and managing a team of freelancers and producing her own stories. While Omaha is home to other Spanish-language news outlets, among them the growing Mundo Latino, El Perico has been busy providing service journalism and more in-depth reporting than found elsewhere.

“People didn’t know what to do,” Velásquez said. “Some people are immigrants and don’t have status right now. They are at a disadvantage.” El Perico reminds her of a community-based reporting project aligned with Hugo Chavez’s ideology she was part of in Caracas, Ciudad CCS, that focused on “identifying progress and showing the good things” about the community.

Bringing in a Spanish-language community publication to the culture of an alternative weekly required adjustments on both sides and Heaston maintained the two as distinct publications, initially keeping the offices separate. There was little overlap in coverage or, for that matter, in advertising. The Nebraska Latino community is mostly Mexican American and more than doubled in the 1990s as workers were recruited to meat packing plants. Heaston saw a market in Omaha’s rapidly expanding Hispanic-serving restaurants, supermarkets and services. He published a 200-page business directory that was “wildly” successful. “I thought I was going to do Spanish-language phonebooks across the Midwest,” he said.

Then the 2008 recession hit. Heaston scrambled to build a new business model, as well as, by necessity, find more ways to merge El Perico and The Reader. Easing the transition, the two had joined forces in El Perico’s office in 2007. The community content, about new Latino-serving organizations, ran only in El Perico, but more in-depth pieces, on topics such as how then Kansas Secretary of State Kris Kobach was creating local anti-immigrant ordinances, were cross-published. 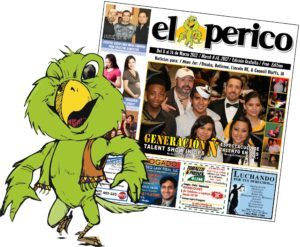 A copy of El Perico from 2012, as the paper was finding new ways to work with its sister English-language publication.

Heaston credits the business marketing agency with saving his publications, and it’s a service he thinks more alternative weeklies and community press should adopt. Heaston launched Pioneer Media after the 2008 crash when he realized he could not depend upon advertising alone to support his business anymore, and noticed that local businesses were at a loss as to how to build their digital portfolios. Rather than selling them a print ad that would not likely attract anyone to their business, his company started selling help with digital portfolios: SEO, online management review, video photo tours and more. This consulting business took off, and, according to Heaston, Pioneer Media now has a 95% retention rate with about 50 clients. But those clients tend to be larger businesses and only a handful are in the Spanish-language market which Heaston says was a goal for 2020. When coronavirus hit, he also realized they had targeted their digital consulting elsewhere, but needed to apply more of the lessons to The Reader and El Perico.

This complementary consulting practice is a business model followed by a handful of other alternative weeklies such as Phoenix New Times and The Jackson Free Press. For The Reader and El Perico, with print circulations of 21,000 and 5,000 respectively, the business model provided sustenance. Heaston, who is active with the National Association of Hispanic Publishers, recently started consulting with El Informador in South Carolina and Al Día en América in Kentucky.

“What does local media look like going forward?” he asks. “Low overhead. Lean and efficient.” If more outlets adopt the steps of El Perico and The Reader, he believes, “a good number will have a shot at coming out of it on the other side.”