In Mixtec, an indigenous language from Mexico, there is no word for virus. For Juvenal Solano, a host and organizer at Radio Indígena in California’s Ventura County, that has made it a challenge to ensure that his listeners, many of them field workers, understand the deadly threat and how to protect themselves from the pandemic.

“We need more words to explain what the sickness is,” said Solano, who grew up in Oaxaca speaking Mixtec and moved to Ventura in 2001 to pick strawberries. So when he goes on the air in a community organizing office studio he explains that coronavirus is like a strong cough, but can be deadly. That it is contagious, and that listeners need to protect themselves. 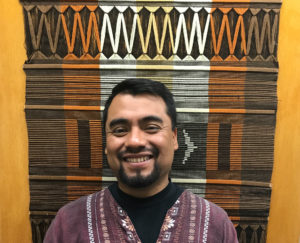 Arcenio Lopez, director of MICOP, in the Oxnard, California, office of the organization. (Photo by Daniela Gerson)

His voice is broadcast across the strawberry fields and citrus groves of Ventura County, via small radios workers tuck into belts tuned to Radio Indígena. His show may start with a greeting of “tanìndíí,” good morning in Mixtec, one of three indigenous languages, as well as Spanish, that are broadcast. In addition to covering the pandemic, between music sets the station may report on immigration raids and rights, women’s health, or a recent folkloric dance event.

Yet, while field workers tune in to Radio Indígena in the tradition of longstanding radio outlets with organizing roots such as Radio Campesina and Radio Bilingüe, the most active interactions are online, especially on the outlet’s Facebook account. There, Radio Indígena has more than 11,000 followers. Certain videos, from cultural celebrations to a protest in Sacramento on the rights of undocumented youth to health care, have gone viral, the latter receiving more than a million views.

The director of Mixteco Indígena Community Organizing Project (MICOP), Arcenio Lopez, expected when they launched in 2017 that the radio would take off. He knew that residents were hungry for information in their native languages, as well as in Spanish – which most indigenous people also speak and is the primary broadcasting language. Still, the social media success surprised him. The average indigenous farmworker in California attended six years of school, and those over 40 fewer than three years, according to the Indigenous Farmworker Study. As a result, some farmworkers are illiterate. But that does not mean they do not use social media. “We have these constant stereotypes that they don’t know social media and technology,” Lopez said.

Farmworkers find ways to connect via video, voice memos, and with the help of children. As President Trump threatened new immigration raids in 2019, the questions via Facebook Messenger poured in to Radio Indígena: “Can you please provide us with information about if there are going to be raids in Oxnard?” one asked, adding that many people were commenting that it was going to happen but they needed to know from a “trustworthy” source.

Hugo Morales, the founder of Radio Bilingüe, who is of Mixtec background, suggested to the non-profit MICOP in 2013 that they take advantage of a window of opportunity to create a community radio station to inform the linguistically isolated communities they serve in Ventura. (Radio Bilingüe, based in California’s Central Valley, has broadcast select programs mixing music and commentary in the indigenous languages Triqui and Mixtec, such as its “La Hora Mixteca” on Sundays.) 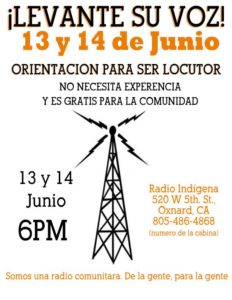 As a community organization, MICOP looked to the local indigenous community to decide whether to move forward with a station. “They organized public meetings and invited local musicians, business owners, and community leaders to ask for feedback on creating a community radio station,” writes Carlos Jimenez, an assistant professor at Denver University, in a study of the station: Antenna Dilemmas: The Rise of an Indigenous-Language Low-Power Radio Station in Southern California. “The response from the indigenous community was so positive that attendees joined the committee on the spot, and the meetings were used to organize the first concert fundraisers.”

When they initially had trouble getting the license, organizers noted that while many farmworkers lacked computers or high-speed internet, they used their mobile phones to play chilenas [regional songs] on YouTube and to stay connected to friends and family. They decided to launch first online, in 2014, with an option to dial in from a cell phone.

When Radio Indígena began broadcasting three years later as a low-powered FM station, it was the first outlet to target the estimated 20,000 people with indigenous Southern Mexican roots in Ventura County. It was one of hundreds of stations born after the passage of the Local Community Radio Act of 2010, which authorized the FCC to award new licenses for local low-power FM stations, including some that targeted immigrant communities, such as a Somali one in Minneapolis and an Ethiopian one in Denver. The Prometheus Radio Project, the non-profit media advocacy group that lobbied for the law, helped many of these stations get their start by training broadcasters on how to research community interests and providing technical assistance in the studio setup. 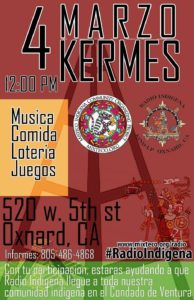 In launching Radio Indígena, MICOP both followed a tradition of community organizations supporting Latino radio, and also created a new form of connection specifically targeting indigenous communities. “Radio Indígena is a rare phenomenon that few indigenous Mexican communities have had a chance to experience, even when compared to their home nation,” Jimenez writes. “The unexpected reality is that they have had to immigrate north over 3,500 km to a foreign nation to access the public airwaves. This is what makes the rise of Radio Indígena unique.” Their digital listeners, while mostly in the area, also come from indigenous communities from Washington State to New York to Oaxaca.

Solano says that especially at this moment of great uncertainty, when farmworkers in the fields are still laboring the same as before the pandemic but are facing new threats, the ability to have a secure place to obtain information and community support is critical. Many listeners said employers had not told them anything, and they were confused by messages quickly moving on social media. They are also afraid of immigration consequences, and Solano said, many are facing wage theft. “The radio or social media, Facebook, is where we know the majority of our community is,” Solano said. “We take advantage of that to put out videos about our rights, health, in Spanish and Mixtec.”

Despite the name, most of the radio’s content, Lopez estimates 60%, is in Spanish. Many of the DJs and hosts, primarily volunteers, may speak with family in indigenous languages but don’t feel comfortable speaking in them publicly. The languages tend to have numerous variations, and they are concerned their proficiency will be criticized. “If a DJ speaks a different variant of course people won’t like it,” Lopez said. “A lot don’t have a career in radio or communication, getting that feedback is not really positive and makes them insecure.”

Although the initial funding of $20,000 for the antenna came primarily from the community, as a non-profit the radio’s current expenses are covered through grants. The financial piece remains a challenge. “Even though it’s a community radio station, it’s expensive,” said Lopez. “We need funding to cover those expenses.” There are two full-time employees, audio equipment and a studio to maintain. In addition, in order to grow, the community-led project needs to train community members in how to report on their communities.

Lopez hopes one day Radio Indígena can develop to represent and investigate issues in the community. But for now, he also sees its value, particularly when he goes out and works with other indigenous communities in California that lack a radio source. “Right now I see it’s an information source,” Lopez said. “There is this trust.”