Days before the lockdown went into effect in Washington State, Mohamad Ahmed sat in front of a projected Seattle cityscape speaking with his two guests in Somali. The program, broadcast live on Salaxley TV’s social media, detailed the local resources available for app-drivers to survive and feed their families. This was a matter of keen interest not only to the audience, which reflected the heavy participation of East Africans as drivers in the Seattle area, but also to the host of the program, who at the time was a driver himself.

One of the guests, Ahmed Mahamud, an organizer with the App-Based Drivers Association, said that after they completed the broadcast he started hearing from drivers. “A lot of people said: ‘Oh wow you really released very good information for us.’” And weeks later he credited this talk show with playing a key role in disseminating information that helped many app-drivers apply for and receive unemployment insurance. 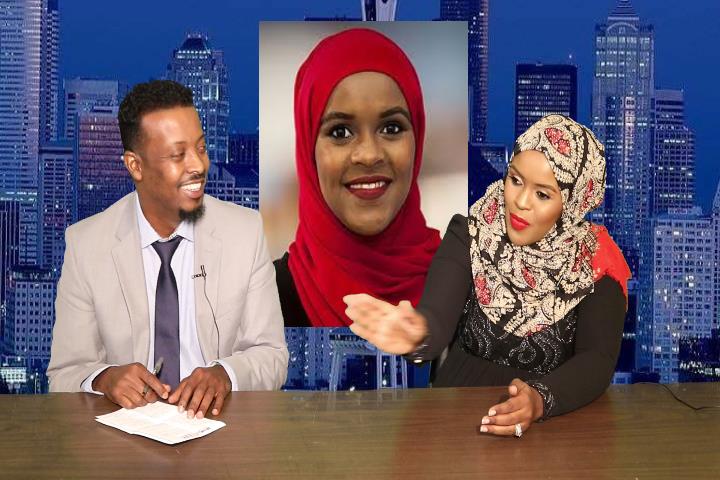 Ahmed conducts an interview with Dr. Anisa Ibrahim who became director of the Seattle health clinic where she was treated as a young refugee from Somalia.

Ahmed created Salaxley TV five years ago to provide local Somali residents with information about their community, delivered via an accessible medium in a language they understand. Today the social media-based program has more than 60,000 subscribers on YouTube and 30,000 followers on Facebook. His formula seems to be working. “According to the immigrant residents we work with, many Somali-American community members who are fluent in Somali are unable to actually read Somali,” said Joaquin Uy, the external affairs manager and policy advisor at the Seattle Office of Immigrant and Refugee Affairs. “So, video and audio forms of media tend to be preferred. Salaxley TV does not air on traditional cable or local television outlets. But they have a Facebook page and a YouTube channel where they produce and broadcast a number of public-affairs programs in Somali.”

The interview with the app-drivers union on March 15 was the last broadcast where Ahmed would sit next to a guest. But since then, as he sits alone broadcasting out of his garage, he has ramped up coverage, some days offering multiple interview shows, bringing in experts to explain everything from the stimulus to mental health risks. Some interviews, such as how to deal with children at home or observe Ramadan under COVID-19 quarantine, have done particularly well.

Named after a city in Somaliland, the northwestern region of Somalia, Salaxley TV has from its inception relied on questions from various community members – school board employees, teachers, doctors, and imams – to shape coverage, and that has been all the more important in the current crisis. For the talk show format, Ahmed also brings in both local and global viewers, encouraging them to call a WhatsApp number, and soliciting questions during and before the interview. 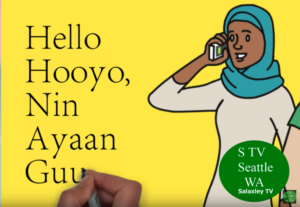 Salaxley TV also offers animations. Here a young woman in the U.S. is calling her mother in Africa to tell her that she has just gotten married.

There are only about 10,000 Somali immigrants in the entire state of Washington, according to census numbers, so Salaxley TV’s following is clearly drawing from the global diaspora displaced due to the civil war that has ravaged the East African country since the 1980s. This broad audience has surprised Ahmed, who learned to interview on the job, after seeing a need for more information about the city for other Somali immigrants. “It was just an accident,” Ahmed said of his rise to YouTube broadcaster, noting he was a shy guy growing up. “People will call me or send an email [saying] ‘is that you? We never thought you were going to be on camera.’”

Ahmed’s journey to become a digital TV host for Seattle’s Somali community started with math. After fleeing his home in 1991 at the age of 18, landing first in Ethiopia then traveling to Kenya, he was able to join his family five years later in the U.S. when his mother sponsored his visa. Ahmed enrolled as a college student in North Carolina, but he struggled with calculus. A tutor could not help him since part of the problem was a language barrier, and on the internet he could not find any videos in his native Somali.

A few years later after graduating and relocating with his wife and young children to Washington State, he decided he would make things easier for others and created his own explainer videos: “Why not give this to kids?” he reasoned. Soon, Somalis all over the world started looking him up to learn math.

Then Ahmed thought there may be an opportunity to support his community in a broader way. “The local Somali community is facing a lot of challenges. Why not give them the information they need?” he said. “They are not aware of what is going on in the city.”

A census campaign in collaboration with the Washington African Media Association. (Photo by Assaye Abunie)

Salaxley TV has gradually carved out a niche over the past five years, covering topics including news, health care, and entertainment. Other Somali-serving news outlets have existed for a while in Seattle, which has a Washington African Media Association with 11 member outlets. The most established of the Somali outlets is Runta News, which publishes in both Somali and English and was created by an immigrant who once reported for outlets like the BBC and AFP. But while the paper offers traditionally reported stories and has recently expanded its coverage to the broader African community, Salaxley TV keeps the focus on being a local information source for the Somali community.

The station has never brought in enough money to allow Ahmed to give up his day job, which most recently was driving an Uber, and others who work with him do so on a volunteer basis. Until coronavirus he also used his video skills to document weddings, community gatherings and musical events. Most of those were private gigs, but sometimes Ahmed posted the events on the Salaxley TV website and received a payment for that. Most people come on the show for free, but Salaxley TV will explain the financial situation to guests and listeners and ask for donations, which helps bring in about $10,000 a year. “It’s up to them if they give $25 or $500,” he said. “We just do it for the community, so there is no condition whatsoever. We just tell them how it is.”